Congratulations to Senior Football players Cameron Geraci and Matt Rouse on being a part of the 1st Annual American Cancer Society All-Star Football Game!  Both Tigers started on Friday, December 20th at Lindenwood University.  Rouse was a team captain and started at center on the offensive line and Geraci on defense at tackle. 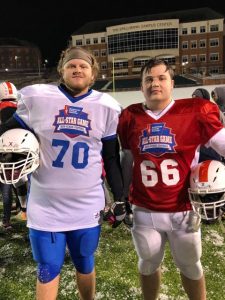 Congratulations to Team White, coached by Bob Bunton who won our inaugural game 14-6! It was a fund game to watch, the kids loved playing in a D2 Stadium, and even enjoyed the snow! The true winner was the American Cancer Society.  Thank you  Charles Glenn as our National Anthem singer, and he was more than gracious with his time and talent. 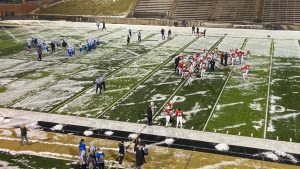 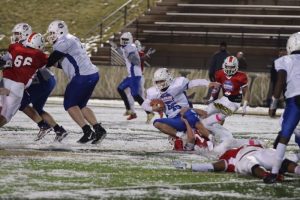 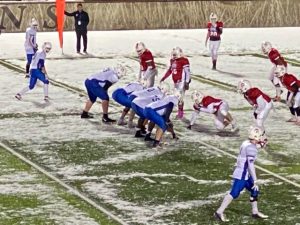 A solid crowd in the stands, and a lot of support from multiple high school coaches that didn’t have players playing in the game. The feedback received was overwhelmingly positive, and are excited to make this an annual event. The volunteer coaching staff put on a first class event, and their experience added significant value to the experience for the players. With the new logo branding, the game day uniforms/jersey’s, commemorative coin, program book keepsake, and airing the game on Prepcasts – allowed the players to feel like they were part of something big.

The coaching staff was top notch.  Former HS coaches, current HS coaches and former NFL players that truly created an experience for these young men, that they will never forget.  A HUGE thank you to Coach Larry Frost, Coach Bob Bunton, Marc Lillibridge and David Brader for being a part of the planning from the very beginning. A special thank you to Jennifer Younkins for bringing this idea to us, and being there every step of the way – people like these are why we are raising the critical funds! Thank you to the St. Louis Battlehawks for coming to the table the minute they hit town – this is a partnership that will continue to grow.

To the HS Coaches who nominated players, raised funds through ACS benefit games – thank you! Because of you, your communities have a greater sense of understanding and awareness. We look forward to partnering with you in 2020 – so be ready for my emails and outreach! Thank you for coming out to the game and supporting your players! Your role now is to continue to support this effort, nominate players and let your fellow coaches from the other 40+ schools to get their ACS Benefit games set – and nominate their players – and give them this opportunity that you did in 2019!

Speaking of fundraising… to date, we have raised $19,000 gross income… we have yet to tally credit card donations, as well as T-shirts – but that is a safe guess for now without knowing those two numbers.

To watch the game please click here and check out the live stream provided by Prepcasts! They donated their time & services to ensure that the players had family out of town could still catch the game. To date we have reached over 228 households!

To see photos from the game, go to our Facebook Page – https://www.facebook.com/ACSAllStarGame