Qualifications for the Hall of Fame

Nominee must exemplify a lifetime of the highest standards of sportsmanship, ethical conduct and moral character.

Nominee must have participated in a high school sponsored sport.

Nominee must fit into one of the following categories

Nominee must be graduated from high school for a minimum of ten (10) years.

Nominee must be recognized beyond the halls of Oakville High School; for example:
All-Conference/District/State/Metro/Other.

Deadline for nominations is September 1st of each calendar year. 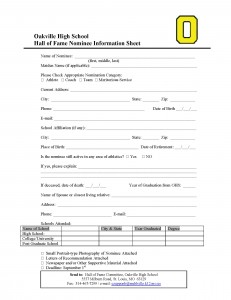